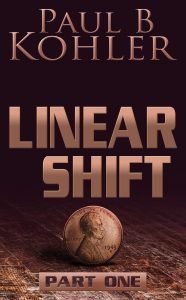 A distraught widower on his last leg. An unexpected mission back in time.

When Peter Cooper has a bizarre encounter with a desperate Army general, he’s suddenly catapulted to the year 1942—World War II is in full swing. Peter is charged with altering a single moment in time. If he fails, his personal history could be jeopardized. If he succeeds, he may very well alter the outcome of the war. But, unbeknownst to him, a secret society looms, threatening to destroy everything, and ruin any chance of him returning to the life he once knew.

With his personal fate—and the fate of the entire world—in his hands, Peter must be willing to stop at nothing to succeed. Is the once broken man up to the task?